This is the toughest vote in the entire tournament! 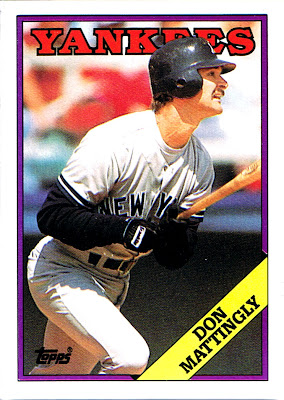 We start with card #300 of Don Mattingly, in my opinion easily the best card of the entire 1980s. It's an iconic photo that is quite different from all the other photos in this set, as they deliberately got a much closer-up shot of Mattingly in the act of batting than is seen on other cards. We get a great shot of the Yankee road gray uniform. Add in that, at this time, Mattingly was king of the baseball world coming off a monster 1987 season, and I don't see how this card cannot win this tournament. (But that's why we're voting...!) 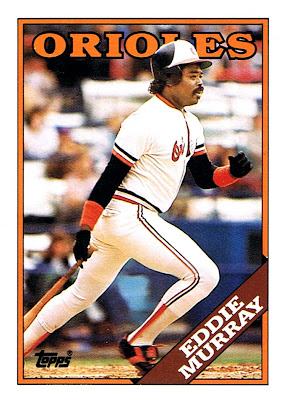 If any card can beat Mattingly, this is the one: #495 Eddie Murray. This is one of two Murray cards to make it to the final tournament. It's a great motion shot, with Murray's powerful legs propelling him out of the batter's box. His striped front leg, back lag, right arm, and bat were all captured at identical angles, which is simply astounding. His left fist pumping and the forwarding-facing orange chevron on his sneaker are all adding to the motion of this card. Add in the great orange color scheme that Topps used for Orioles cards this year, plus the fact that Murray was an incredible Hall of Fame player, and he might just be the guy to take Mattingly down.

Online Surveys & Market Research
Posted by Andy at 8:30 AM