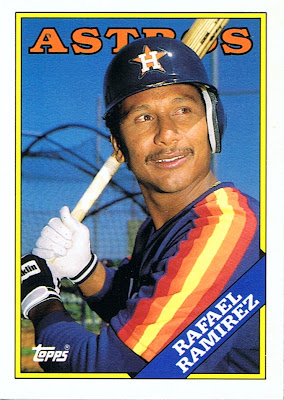 This is a pretty cool card. For starters, they actually put a light on Ramirez's face so he wouldn't be in the shadows. Plus they got some nice spring training action in the background. The only odd thing is that they apparently told Ramirez to look out of the corner of his eyes at something way off camera. I can't think of another baseball card with a player looking so far askance.

Does anybody know what's up with Ramirez' odd 1987 Donruss card? See this post at A Pack a Day for a scan of it.

IMPACT FACTOR 3/10: Ramirez had one good year with the Astros in 1988, managing a 97 OPS+ over a full season, which was very nice for a middle infielder back then. He had 4 more decidedly mediocre (and that's being charitable) years after that with Houston. 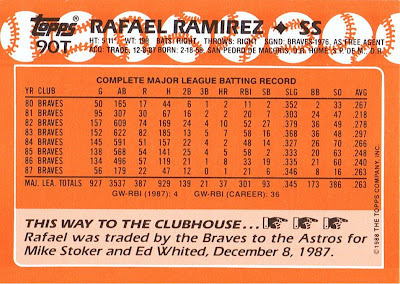