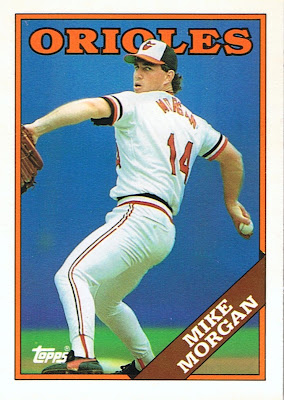 In 1988, 26 different pitchers had at least 1 complete game as well as 1 save. That high number surprised me. Morgan had the worst ERA+ of them all. The Orioles moved him around, obviously, try to get some effective pitching out of him.

IMPACT FACTOR 4/10: Morgan pitched one ineffective year with the Orioles, that same 1988 mentioned above. How, then, does he get an impact score of 4? Easy. The Orioles acquired him by trading Ken Dixon to the Mariners, and Dixon never played in the big leagues again after leaving the Orioles. However, when they ditched Morgan a year later, they shipped him to the Dodgers in exchange for Mike Devereaux, who became the Orioles' center fielder for a bunch of years and helped them climb back to prominence. 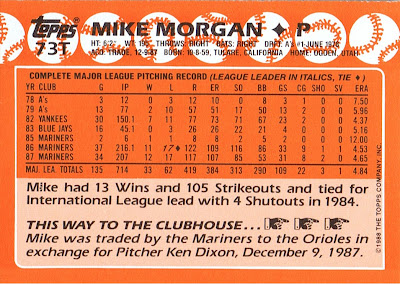 The Cubs decided to keep Morgan and let Maddux go. Good decision. Or ANOTHER good decision by the Cubs' management.

Don't really have a Mike Morgan collection yet, but it's tempting, given his peripatetic career. Think of all the different unis!