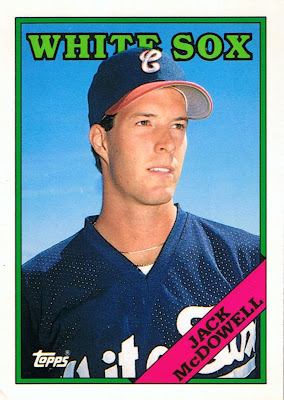 Blackjack! Here's one of the best rookie cards in the set!

IMPACT FACTOR 6/10: McDowell was a fantastic pitcher for the White Sox in the late 80's and early 90's. He was the first of 4 outstanding #1 draft picks by the White Sox, followed by Robin Ventura in 1988, Frank Thomas in 1989, and Alex Fernandez in 1990. McDowell, along with those other players, helped return the White Sox to prominence after years of futility. After winning 20 games in 1992, he won 22 (and the Cy Young award) in 1993, helping get the White Sox to the post-season for the first time in a while. Had McDowell not been hit hard twice by the Blue Jays in the ALCS, he would have gotten a higher score. Eventually, the White Sox traded him just as he was losing his effectiveness to the Yankees, picking up a useful part-timer in Lyle Mouton. 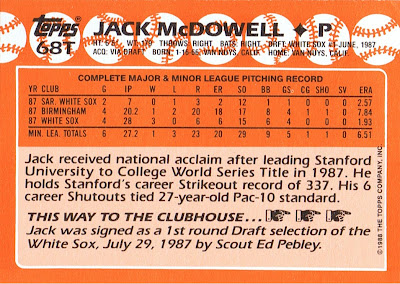 Man, I LOVED the 1993 White Sox. They're still one of my favorite teams from Ken Griffey, Jr. Baseball on SNES.

Looking at the stats on the back there, Jack had a pretty impressive debut in late '87. Especially considering that he was a #1 pick, why the heck couldn't Topps squeeze him into the regular set of 792?

Yeah, instead of Pat Keedy perhaps.

Pat Keedy! Who makes the decisions for card companies? As a baseball fan, I (or any of us) could make better choices.

Who can forget Black Jack flipping the bird to the Yankee Stadium fans in 1995.

I would have thought the impact score would be higher, but when you explain your decision, it becomes crystal clear. I totally agree. It's very weird to see McDowell without his facial hair.

I'm wondering if we'll have a 10/10 impact factor card in this set. I haven't looked ahead so I don't know. So far I think Grace is the highest player.

I have to avoid this card because every time I see it I have an irresistible urge to grab a sharpie and add a goatee.