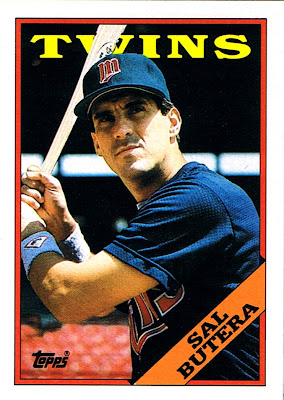 Why this card is awesome: Because of the mention of assists by a catcher. Exactly when do catchers get assists? It's kind of complicated. A catcher gets an assist on, for example, a dropped third strike where the batter is put out by a throw to 1B. He obviously also gets an assist in a rundown when an out is recorded. And he gets an assist when he throws out a would-be base stealer.

Cool stat: Tough to find much on Butera stat-wise, but he did hit pretty well against Dennis Martinez, Frank Tanana, and Bob Stanley. 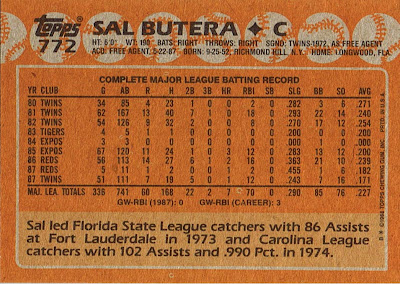 My friends and I are assembling the Backup Catchers Hall of Fame. Unfortunately for Sal, he falls a bit short. The qualifications are not yet ironed out, but we are leaning towards
-10 years major league service
---->may be reduced for pre-1970's
-no more than 1 season as starter
---->81 games/300 AB's
---->maybe 2 if regular starter injured or team really bad

9/7/86 -- Sal pitches a scoreless 9th to run his streak to 2 scoreless innings pitched at the beginning of his career (only about 36 behind Brad Ziegler's record). Here's a "go figure": Chico Walker homers off Bill Gullickson, but Sal Butera strikes him out.