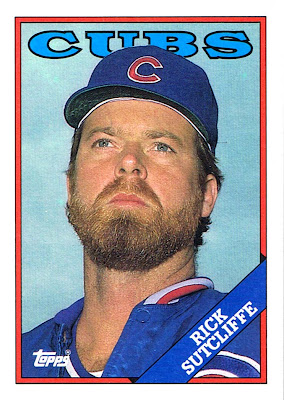 Why this card is awesome: Because, man oh man, 16 wins in 20 games with the Cubs in 1984. Nobody will ever forget that, although C.C. Sabathia might do as well with the Brewers this year.

Sutcliffe has one of what seems like a rash of former players making embarrassing appearances in TV when he appeared on an ESPN telecast obviously drunk. I would guess the video is around somewhere. To his credit, he wasn't working, he was just in the crowd. There's nothing wrong with drinking off the job--or at least in that case, how much you drink is your own business, not your employer's.

Cool stat: It's pretty rare to register 300 decisions in MLB with a below-average ERA. Only 17 guys in history have done it. Sutcliffe was one of the very lucky ones, registering a very healthy W-L% of .552 despite that very average ERA. Of course, nobody was luckier than Lew Burdette, who managed more than 200 wins despite being very average. 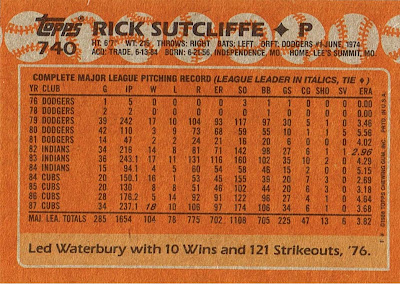 I love the card back comment-- filling us in on the exploits of Rick Sutcliffe at Waterbury. Seriously, that's the sort of blurb that should go on the card of a 32 year old knuckleballer whose career major league stats are 3-7 with a 5.73 ERA, not Rick Sutcliffe.