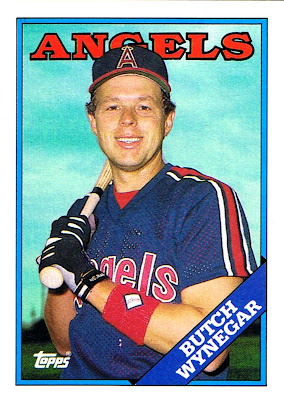 Why this card is awesome: Because of the cool wrist band with the diamond on it. Who knows what it says?

Cool stat: Wynegar had a great start to his career. He's one of just 5 guys to have at least 10 HR, 2 3B, 600 PAs, and 68 BB in each of his first two seasons. The others include Ted Williams, Albert Pujols, and Jeff Bagwell (wow!) But Wynegar wasn't a great hitter nor did he have great power, and his career went downhill from there.

Two notes: 1) As always, B-R.com counts cups of coffee as a first season, so this search may miss some guys who should really be on the list. 2) It's pretty remarkable how similar Wynegar's first two seasons are to each other, statistically. Pujols did the same thing. 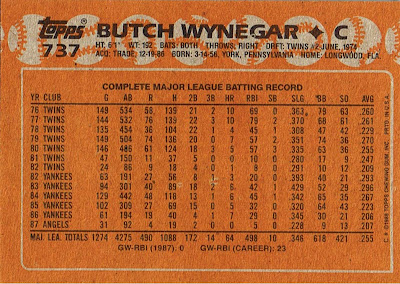 I think the diamond has and ols Angels logo; the one with the map of California. Was that logo used in 1988?

It looks a little like the Arkansas state flag; then again, there's no link that I know between Wynegar and Arkansas.