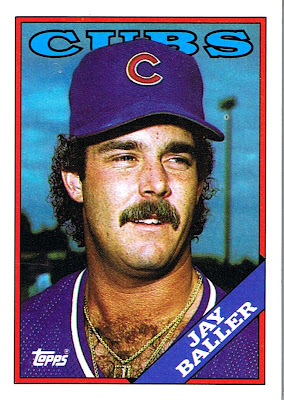 Why this card is awesome: Because, what more can I say about this card than what was already written here by Ben Henry. At least Baller joins our little necklace club. And I can just hear Jay saying "Baller? I didn't even touch her!"

Cool stat: A surprisingly large number of players have had a season allowing exactly 10 ER and 10 hits. They all, for lack of a better word, sucked. 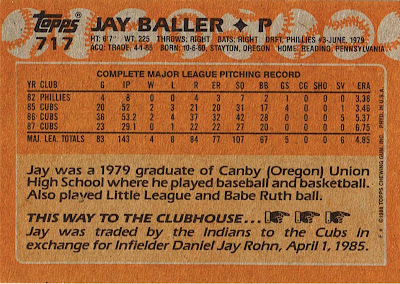 Also, I hesitate to spread dirt about people, but in light of the recent Sammy Stewart posting, I thought that I might cite this interesting story:
http://readingeagle.com/article.aspx?id=53729
I don't know what the outcome of the arrest was.

Jay looks like he could be an extra on "Swingtown."

The link to the arrest suggests a very lax judicial system. He's alleged to have been playing with a loaded .45, has $15,000 cash in the car (which is going to help tax problems....allegedly. Side note: people who have $15,000 cash with them in a bag usually are involved in some type of activity that isn't reported to the IRS.), and they've got cocaine. What do the local authorities do? Release him and MAIL him a summons, kind of like a traffic ticket. WOW!

Indeed I did, thanks Chris.