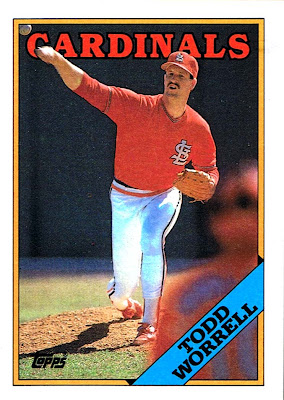 Why this card is awesome: Because I can't figure out who the blurry figure in the foreground is. It might be somebody catching Worrell, or it might be somebody just watching him throw. I am going for catcher, though, since you can see what looks like the strap from the catcher's mask on the guy's head. His number seems to end in 0 and is either 10 or 40. Checking out here, though, suggests Doug DeCinces (#10) or Tim Conroy (#40), neither of which makes sense, nor does the name on the back of the jersey look like either. Maybe it was a bullpen catcher. Who knows?

Cool stat: Worrell had an interesting career, coming back from a bad injury that caused him to miss 2 full seasons to have some great years with the Dodgers. Checking out his career home run log, note that he gave up more homers to Howard Johnson and Ken Griffey (Sr.) than anybody else, plus two of the walkoff homers he allowed were in consecutive games in 1987. 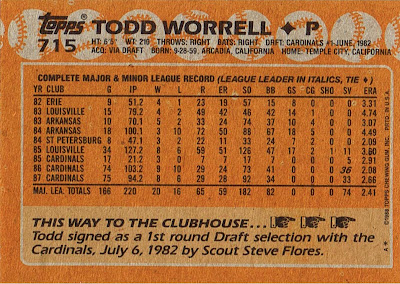 Check out all those clutch homers he gave up in '97! Twice that year, he gave up game-tying and game-winning homers in the same inning.

I remember those homers that Johnson hit off good ol' Torch Worrell. The 1986 one was a game-tying homer I remember because I was in a St. Louis hospital waiting for surgery the next day.