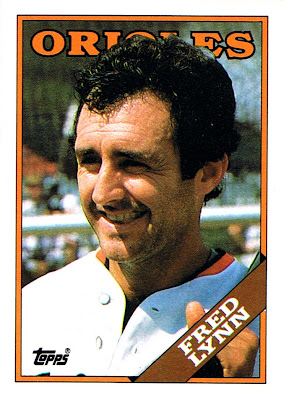 Why this card is awesome: Because Lynn's hair obscures parts of not 1, not 2, not 3, not 4, but 5 different letters from the "ORIOLES" team name. Wow. Also, if you don't look carefully, you won't even notice that he's holding a bat, as it's almost completely behind his name banner.

Cool stat: Starting in the Steroid Era, when handfuls of players started hitting a lot more home runs, it became more frequent for a guy to get an OPS+ as high as 176. But Lynn had one of just 8 seasons in the 1970s, coming in 1979. (Compare that to the last 10 full seasons, when 17 such years have happened.)

Lynn also has the most career seasons with exactly 23 HR, and his came all in consecutive years! 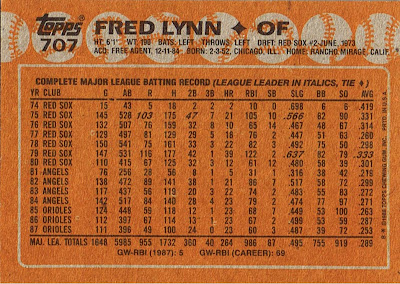 Fred Lynn was a great player who had trouble staying in the lineup, averaging only 116 games per year over his 17 year career. If he could have raised that figure to 140 while maintaining his production, he'd still fall short of HOF standards, but he'd get some consideration, and the immense talent he had would be recognized.

He's a guy who is "thought of" as a great player until you look at his stats, then you realize, wow, he was overrated.

Well I think you're both right. Lynn cannot be considered great because he didn't play enough. However, he had a career OPS+ of 129, which is damned good, which puts him 83 for guys with at least 6000 AB since 1901. That's not bad at all. He's just behind Eddie Murray.

Ah, a rare crossover between 88 Topps and Orioles Card O'the Day. This card was the first ever featured on my blog: