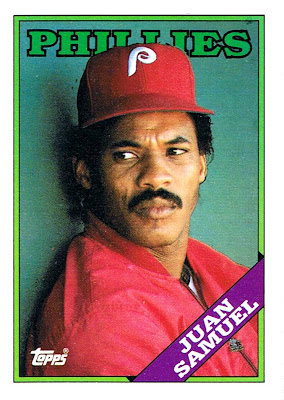 Why this card is awesome: Because it's another Phillie, and another crap photo from Topps. I mean, sure, a closeup of Juan Samuel is nice. But this guy was one of the star players for the then-lowly Philly franchise. Couldn't they give any one of their decent players a decent action-shot card?

Cool stat: In 1990, Samuel had a terrible year stealing bases, getting caught 20 times versus only 38 successful steals. That's one of the worst totals for a guy with 40 or fewer SB over the last 30 years. He shouldn't have been allowed to run. Sabermetric data clearly shows that stealing bases at about 75% success rate is neutral in terms of how much it helps your team score. A guy really needs to be at about 80% for it to be worthwhile (although this ignores the leverage of specific situations.) Anybody on that list above with at least 20 CS had a success rate below 67%. TO be fair, Samuel's 1984 ranks in the other direction. He had one of the lowest CS totals for a guy with at least 70 SB. 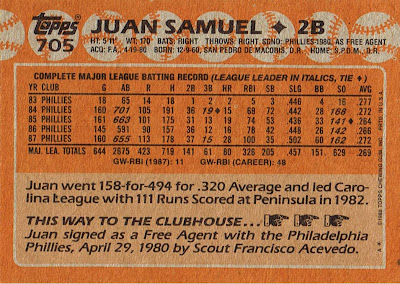 The SB% wothwhile threshold of 75% is an interesting statistic. I read a lot about it at the end of last season when Jose Reyes looked lethargic and worn-out during the Mets' collapse. The consensus conclusion was that 78 for 99 was as good as 47 for 60, but with a lot less wear-and-tear on the body.

When you consider SB%, how would you rank Tim Raines against Lou Brock and Rickey Henderson? In other words, is stealing 808 bases at a .847 rate better than stealing 938 bases at a .753 rate?

When growing up, the trade of Dysktra/McDowell was the first major deal that I experienced as a Mets fan. As a result, I have never been a Juan Samuel fan. ;)

Mike S, I empathize with you.

Did you know that you can create short urls with Shortest and get money for every visit to your shortened links.