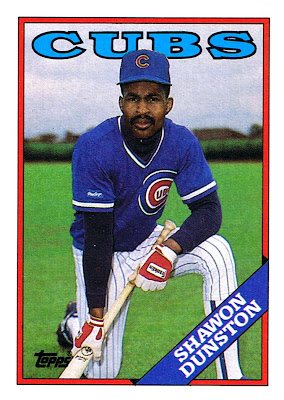 Why this card is awesome: Because, heck, here is another great-looking Cubs card from this set. The only think better than red, white, and blue is when you add a sea of green from an impeccably maintained grassy area. It might sound like I am being sarcastic, but truly I love this card.

Toward the end of Dunston's career, I learned that his first name is actually pronounced like it's spelled, i.e. "Sha-WAN", not "Shawn" like we all thought for years and years. I thought that was pretty cool because it's a much more African American-sounding name than plain old "Shawn."

Cool stat: What with his .296 career OBP, Dunston was, shall we say, offensively challenged. But he was damned versatile, making the top 10 in career homers for guys who played at least 10 career games at 1B, SS, 3B, OF, and DH. 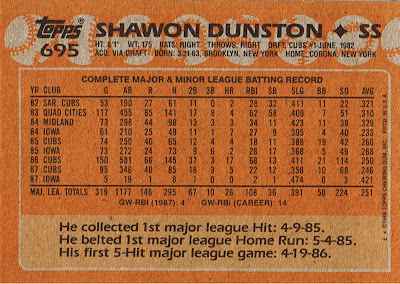 The only time that I've seen BP at a major league game was at Shea in 2001. After Barry Bonds roided a bunch of pitches out to right, Dunston managed an equally brilliant display of his own. Made me wish for a brief moment that our seats were in the bleachers. ;)

What was it that Mark Grace used to say about receiving Shawon Dunston's throws?

I don't know what Grace said specifically, but Dunston had a reputation of being an extremely hard thrower and I think more than one first baseman complained about getting his hand hurt by his throws.

Yes, a great looking card. The only thing that would make it better is if the sky was blue.

Dunston was so versatile (apparently) that you can actually tighten up the qualifications on that stat even more: For players with at least 10 games at every position other than catcher and pitcher (1B, 2B, 3B, SS, LF, CF, RF) ...

I loved to watch Dunston play. He just looked like a ballplayer. The most maddening thing was that he waited until the ball was almost in the catcher's glove to swing. If he had a little better pitch recognition.....

My favorite baseball card is his '91 Fleer Ultra where he's flying over someone after rifling the ball to first.

"I owe him (Shawon Dunston) a lot. Nobody would have known how good I was at digging balls out of the dirt if it wasn't for him and all those bad throws." - Cubs first baseman, Mark Grace

David, is this what you were refering to?