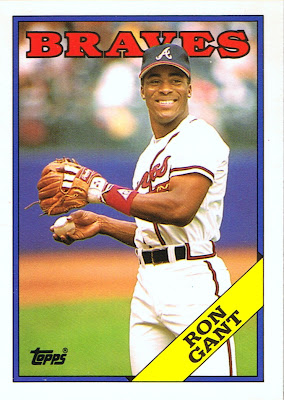 This is one of the best rookie cards in this set.

IMPACT FACTOR 5/10: Gant was a big part of Braves' return to contention, although it was a rocky beginning for him. As a 2B in 1988, he made 26 errors in 122 games. Think about that...this is a second baseman, we're talking about. Wow. The Bravos moved him to 3B where he was pretty much just as bad, but to keep his bat in the lineup they moved him to OF, where he remained for the rest of his career. They were rewarded in 1990 with his first 30-HR season. I can't rate Gant higher than a 5, though, because although he was present for two trips to the World Series, he personally didn't hit well in the post-season (contribution to the Braves losing those series) and he was never really even the best player on the team. Even in 1990 he was slightly out-produced by newcomer David Justice.

Gant ended up leaving Atlanta when he broke his leg while riding a motorcycle, missing the entire 1994 season. He came back strong in 1995 and was a productive player the rest of his career. 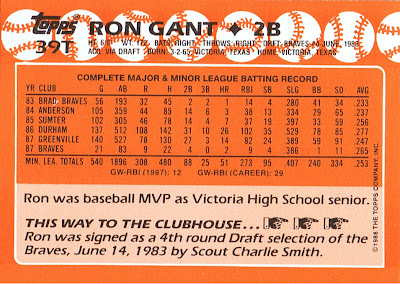 Ronnie's an example of how players develop differently and where it clicks. Coming out of high school, he didn't do much during his first 2 years in the minors, at ages 19 and 20. However, something clicked when he turned 21 and got to Class A Durham (and I think the Carolina League was Low-A at the time) where he broke out. He then charged right through the system, although, in fairness, there wasn't much in his way. I just missed Ronnie in Durham, as I started at Duke in the fall of '86 and didn't go to any Bulls' games that year, but I'd always heard about him rolling through the minors. However, he also struggled for 2+ years before he got on a roll.