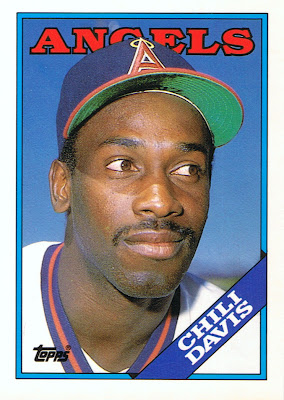 As compared to the preceding card, Davis looks pretty thrilled to be joining the Angels.

Interestingly, despite playing 7 seasons with the Angels, Davis probably had more impact with every other team he played for (Giants, Twins, and Yankees) except for the Royals. He helped all those other teams either get to the post season or to win championships. 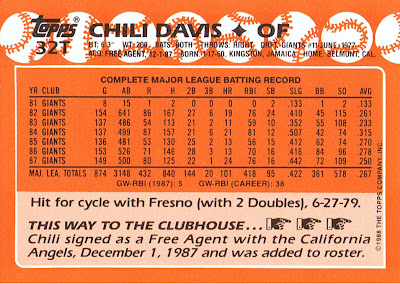 I love the insightful information in the comment. Not only did the California Angels sign Chili as a free agent, but they also took the extra step of adding him to the roster! Imagine the glee in the Davis household: "Mom, the Angels not only signed me, they added me to the roster today!"

Good stuff mmayes. In hindsight GREAT idea to also add him to the roster, since they paid him so much money.

He went froma speed/power guy to a power/no speed whatsovever guy by the end of his career, but wasa feared underrated hitter all the way through.