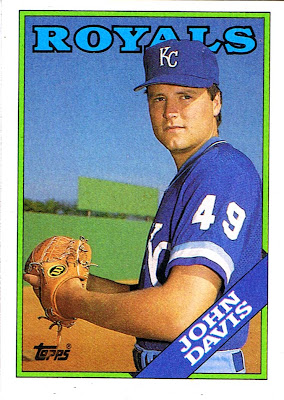 Why this card is awesome: Because this is a very interesting rookie card. Davis had a nice 1987 season with the Royals, but that came after a quiet unimpressive minor-league career (see back of card below.) I guess Topps knew something not making him an all-star rookie, because 1987 was his only good year.

Cool stat: Check out this list of pitchers who had at least 40 IP and an ERA+ over 200 in their rookie season. (As always with B-R.com, it misses guys who might have had a cup of coffee before their true rookie season, such as Jonathan Papelsmear Papelbon, who definitely should be on this list.) Davis was the only guy to do it over a 14-year period, although that probably has more to do with September call-ups than anything else. That list is a real mixed bag. 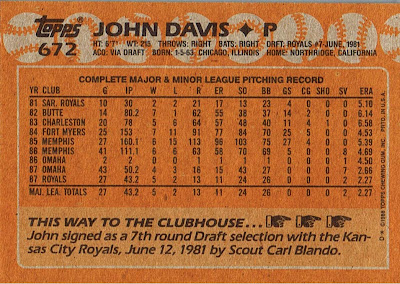 John Davis had a bad K/BB ratio of 24/26. The only other player on that list with more walks than strikeouts was Cardinal wartime rookie Al Brazle, who ended up having a reasonably good career. I'd say the upside down K/BB ratio would have been a good reason to not expect much out of John.