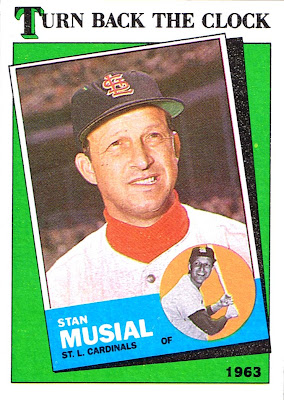 Why this card is awesome: Because, boy, with the TBTC cards, the Hall of Famers come fast and furious. I can't think of anything better in a 1988 set than having a reprint of a 25-year-old Stan Musial card. At the time I collected the 88 Topps set as a youngster, I had never even seen any cards old than a 1968 Tom Seaver that my friend Eric had.

Cool stat: For some reason, Musial often doesn't get mentioned among the very best greats of the game. Names that always seem to come ahead of him include Ruth, Gehrig, Mantle, Mays, Aaron, Williams, DiMaggio, and others. But Stan the Man is top shelf along with those guys. He had a very long and productive career and had a period of peak performance from 1948 to 1954, when he led all of baseball in hitting. During that same period, he also led all of baseball in RBIs and runs scored. And doubles. And triples. And he struck out only 248 times over those 7 seasons. 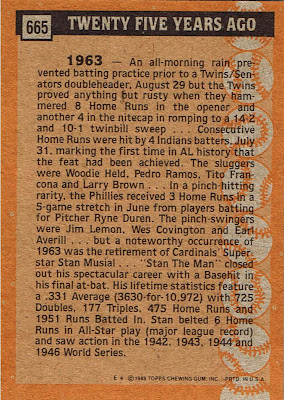 From 1950 to 1958 there were 12 such seasons. Ted Williams and Stan Musial had 5 each in that 9 year period (Williams missed 2 years for the Korean War and had another injured). Ted Kluszewski and Al Rosen had one each. Musial had 2 other seasons; Williams had 5 other seasons and Joe DiMaggio had 4 seasons (his OPB wasn't usually high enough, but he never struck out more than 39 times in a season).

And no one with at least 400 HRs has struck out fewer times than Stan.