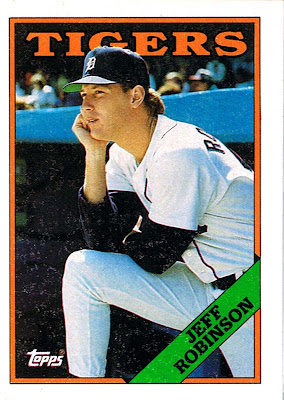 Why this card is awesome: Because if this were a modern day photo, we'd know that Robinson had a cell phone against his ear. In those days, if he had a cell phone, it would have been as big as his head.

This is the other Jeff Robinson. Not this guy.

Cool stat: Robinson's 1988 makes the top 10 for fewest hits allowed in a season since 1901 with at least 170 IP. His walk rate was bad that year, and in subsequent years remained bad while his hit rate went back to average. Therefore, he was no good. 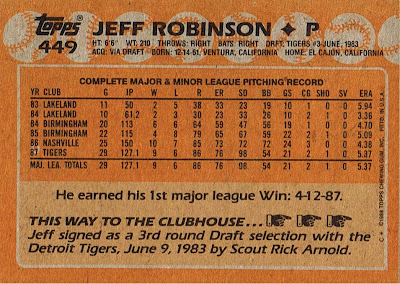 I always got those two confused. Didn't they start using the middle initial of one in later years?

I don't remember that about the Robinsons, Steve. You might be thinking about Greg Harris...Greg A and Greg W.