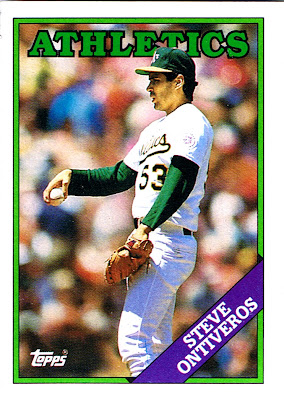 Why this card is awesome: Because so soon after Billy Bean, we get another player who had the same name as another major-leaguer. And in the case of the two Steve Ontiveri, their names are even spelled the same! And they aren't related!

Cool stat: In the last 50 years, there have been 165 seasons where a pitcher had a WHIP no higher than 1.032 while pitching at least 100 innings. Almost without exception, these are good-to-great pitchers. Ontiveros had such a year in 1994 but had the 11th-worst K/BB ratio on the list. 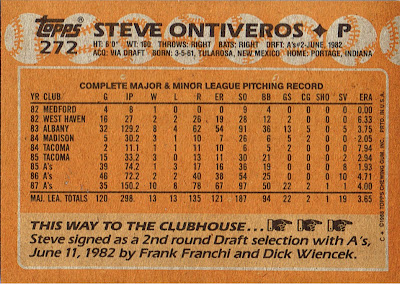 I'm trying to guess what he's doing there. Waving off the pitch? Waiting for a batter? Ordering dinner? Asking for another baseball? Calculus?
The odds against two unrelated Steve Ontiveros making it to MLB must be astronimical.

uglee, I think he was taunting the batter. He was saying, "Look, here's what I'm throwing next, just try to hit it!" Unfortunately for Steve, the taunt failed. HOME RUN!