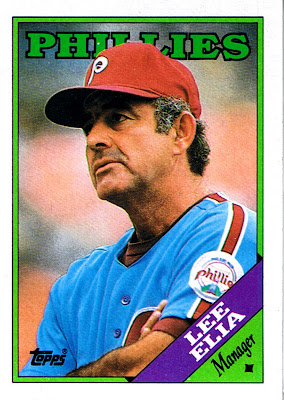 Why this card is awesome: Because it's easy to imagine why Elia has such a grumpy look on his face. Aside from those crazy tirades, look at the pitiful roster of players he had on the back. Beyond an over-the-hill Michael Jack Schmidt, it's slim pickings. 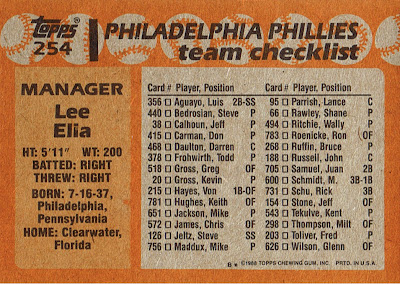 Yikes, Steve Jeltz led the team with 59 walks. Despite a .303 team OBP, the Phils still managed to reach base at a better rate than did the Braves. :X

They had a couple of second place finishes right before this and finished last this year. However, the hidden blessing is that in bottoming out in '88, they started building in '89, traded for Lenny Dykstra and John Kruk and started playing Darren Daulton. This sucky season allowed them to lay the foundation for the '93 team.