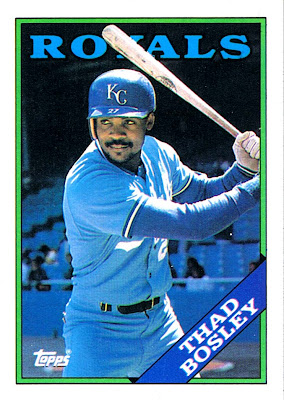 Why this card is awesome: Because it's all so amazingly blue! Bosley is in blue from head to toe, the team name is blue, the banner is blue, and the stands behind him are blue. I love unity.

Cool stat: Bosley had just 20 career homers, but he hit THREE, count 'em, THREE off Jeff Reardon. (He didn't hit as many as 2 against anybody else.) Two out of the three were big ones, putting his team ahead late in games. Overall, Bosley was 4-for-8 against Reardon with 5 RBI. tasty 2.125 OPS. 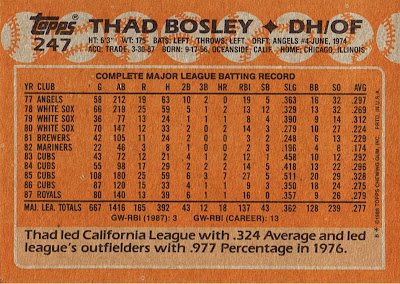 Bosley's final big-league at-bat was against Reardon. He grounded into a double play, so I guess Reardon got the last laugh.

Bosley was in that Rich Dotson / Bobby Bonds trade we recently discussed, too.

I recall an article from 1999 in which Bosley was interviewed solely due to having been the teammate of Nolan Ryan, George Brett, and Robin Yount (all three had just been elected to the HOF). He was also one of the few lefties in MLB history to ever play 2B, albeit for only one inning, although it's not noted at B-R.com since he didn't make a play. http://www.baseball-reference.com/boxes/KCA/KCA198707050.shtml

And yet another Tiger Stadium shot! Topps must have used a Detroit-based free-lancer that year.