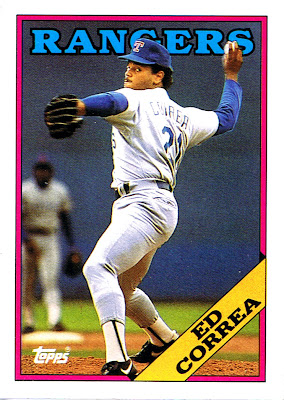 Why this card is awesome: Because, Topps, way to go getting a shot of a middle infielder adjusting his junk. Was this the best photo you had of Correa? Really? REALLY? I think that's either Jerry Browne or Curtis Wilkerson, as they were the only middle infielders of color that the Rangers had in 1987 and 1988 who played more than 1 or 2 games.

Cool stat: First of all, check out this weirdness. 19 guys with the last name Correa have played professional ball, but as of now, Ed Correa is the only one to make it to the majors. That's really odd. Anyway, from 1985 to 1987, Correa had the 5th-highest walk rate among pitchers with at least 200 IP. He never pitched in the majors again after 1987. 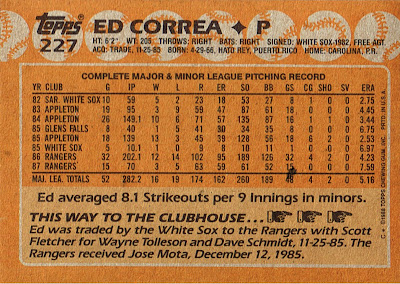 I'm pretty sure that's Manny Trillo in the background. He often used to wear a glove when he ran the bases. And I'm positive that he always adjusted his junk just like that.

Among 1980's junk adjusters, Tom Herr of the Cardinals had no peer. Remember, players in the 1980's didn't wear the baggy pants they wear now. Herr had to adjust on every pitch. As a side note, his son Aaron is a chip off the old block. I believe he's in the Indians system now, so if you're in Buffalo or Akron, watch Aaron Herr when he comes to bat.

Where is Ed today?

According to his wikipedia page, Correa was a manager in Puerto Rico last year.

Are you a relative, Jose?