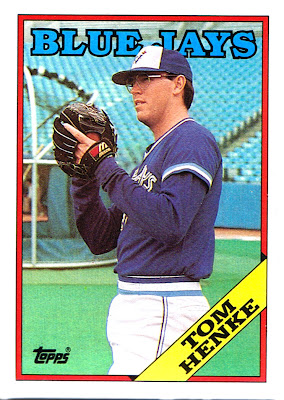 Why this card is awesome: Because of those sweet glasses. Do you think it was worth it to the Rangers to lose Henke in exchange for Cliff Johnson in 1985? 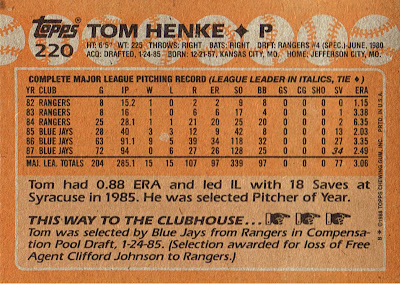 Tremendously underrated pitcher. Plus, if memory serves, he was still damn good in 1995 after which he abruptly retired.

Relievers are a really sticky wicket when it comes to the HOF. Personally, I find it hard to fall in line with what seems to be the two lines of thought on their candidacies - 1) RP's don't pitch enough to be considered HOF-worthy or 2) only certain closers are worthy, but they have to have some mythical intimidation factor.

I would not be able to exclude the elite relievers from Cooperstown, but if you are going to elect, say, Bruce Sutter, what about Dan Quisenberry? If Trevor Hoffman gets in (which seems likely and would go against the "dominant" grain), why not Lee Smith or Wagner or John Franco or Tom Henke even?

Henke has a ring right? He left as one of the best. I'd vote for henke over hoffman. Trevor's not a big game pitcher