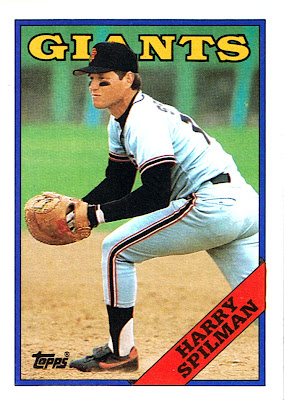 Why this card is awesome: Because what in the world is that in the background? It looks like a cheapo cityscape backdrop for an off-Broadway play.

Cool stat: Spilman was the very definition of "part-time player." He's got the second most career seasons with 101 or fewer at-bats among non-pitchers. Only Tom Prince has more, and that's because Prince was a backup catcher his entire career. 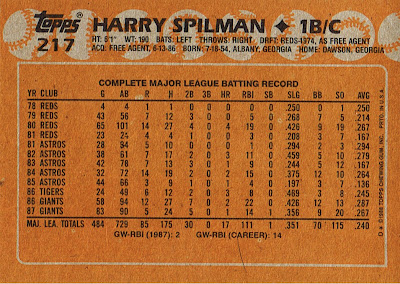 Harry Spilman always struck me as being a poor man's Jamie Quirk. That's like telling actress Camryn Manheim (The Practice) that she's just as attractive as the gal that plays Charlie Sheen's housekeeper on 2-1/2 Men.

Of course, to paraphrase Bob Uecker, anybody can hang around 10 years getting 500 at bats a year, but it takes a special player, like Harry, to have so many years getting less than 101 at bats.

his name reminds me of a lawyer on TV

he had a decent career for a back up guy. He lasted awhile. I'm guessing he had a great raport w/coaches and a solid attitude w/younger players

Impressive, Topps was able to catch a pic of Spilman during one of his 9 games played at 1B in '87.

He looks a little JT Snow. Have we ever seen them in the same place?

His only home run of 1987 was a moon shot upper decker against his hunting buddy Nolan Ryan. I went to about 5 Giants games from 1986-87 and saw all 3 of Spiliman's home runs, I thought he was a power hitter until I got his baseball cards.

I'd be afraid to have Nolan Ryan as a hunting buddy and homer off him. I can see Nolan going Bobby Knight and Dick Cheney on him.