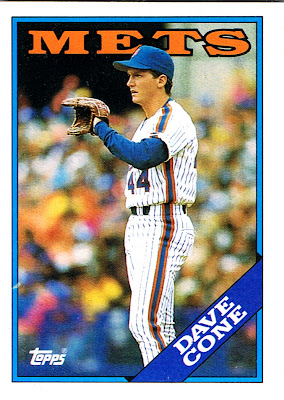 Why this card is awesome: Because of the weird background splotches on the lower left. Just what exactly is going on there?

Cool stat: Cone played in 15 post-season series, with his team going 12-3. He was part of 5 championship teams (one with Toronto and 4 with the Yankees.) Check out the guys who hit the most homers off Cone. Juan Gonzalez sort of owned him with 7 HR, but he had only 6 other (non-HR) hits against him.

Cone has a shot at the HOF one day. 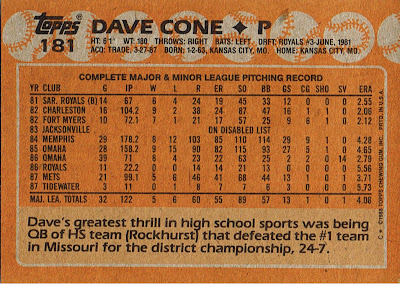 The splotches look to me as if a member of the Blue Man Group has gotten ahold of the multi-color wig of the guy that holds the John 3:16 sign up at games and is trying to get The Wave going. I hate The Wave.

could be the san diego chicken

Cone in the Hall? If I had a vote (which by some injustice of fate I don't), I wouldn't vote for him. At least not without some serious convincing. He just didn't seem dominant out there, but he does have some good stats.

He wouldn't get my vote either. But he does have an excellent winning percentage and played for a lot of champions. Now, his winning percentage is helped by the fact that he played for a lot of great teams, including the late 80s Mets, early 90s Blue Jays, and late 90s Yankees. It would be hard to be a regular pitcher for those teams and not have a winning record. Also, his HOF monitor on B-R.com suggests that he deserves at least some consideration. I expect when he becomes eligible, he'll at least get enough votes to hang around on the ballot.