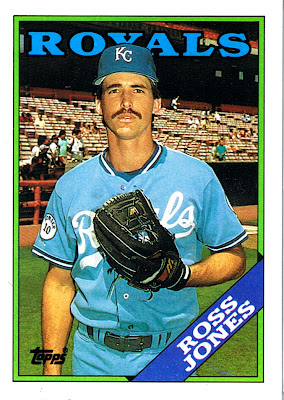 Why this card is awesome: Because of the fact that everybody in the background is looking at somebody off-camera. They couldn't be bothered to watch Jones being photographed (and Jones can barely stand it, judging by the look on his face.) I like to imagine that Bo Jackson was walking over there, distracting everybody.

Also, wouldn't you swear from this photo that Jones was a pitcher?

Also, that's two Jones cards in a row for Topps.

Cool stat: Why does Jones look like a pitcher? Well if you check out his minor league numbers, you'll see that he did pitch in the minors, including full time in 1988 and 1989 after failing to make a go of it as an infielder. Wow. 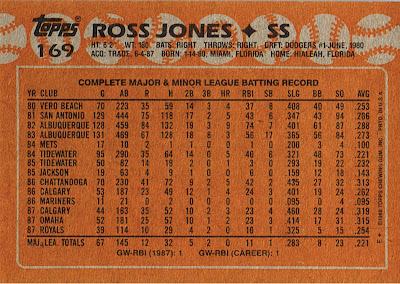 Pitching stats were a heck of a lot better than his hitting stats. In '88-'89, he was almost 1 K/IP his H/IP were reasonable, but had too many walks. Oh, and if you're 29 and in A ball, you're on the fast track to being called "Gramps" instead of the big leagues. I'd say his wife told him it was time to get a real job and put away the minors and his $1000/month paycheck.

Also, wouldn't you swear from this photo that Jones was a pitcher?

Well, from this picture I would swear he bought light blue Royals PJs and wandered into picture day.

I saw Ross play at UM (University of Miami). He was an exceptional player at that time. Why some players don't make it at the next level we'll never know. The Dodgers thought enough of Him to draft him as the 9th overall selection. So you "Gramps and PJ posters" who never made it past T ball can stick that in your pipe!