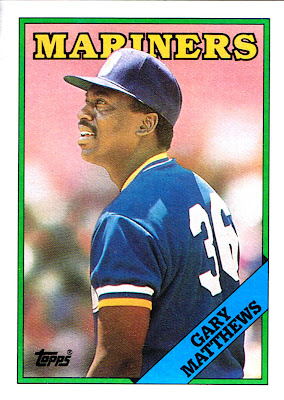 Why this card is awesome: Because Matthews looks so terribly old on this, his last baseball card. But then again, he always looked old, didn't he?

Cool stat: Matthews had a fantastic season with the Cubbies in 1984. In fact, since 1901, he's one of just 20 players to have 100 runs and 100 walks in his 33-year-old season. And Matthews played in the second fewest games of the 20. Lots of great names on that list. 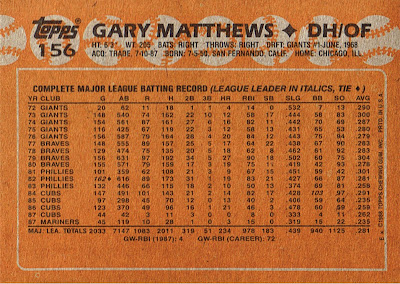 Gary is starting his 2nd season announcing for my favorite team, the Philadelphia Phillies. Some may disagree, but I think Gary Matthews is doing a nice job announcing. Harry Kalas, Chris Wheeler, and Gary Matthews isn't a bad lineup. I still miss the late great Richie Ashburn, though.
P.S. I was going through my cards last night and came across a 1984 Fleer Gary Matthews...he looks even older in that card!