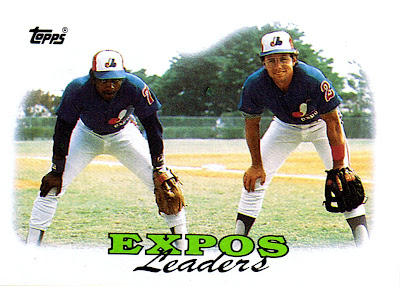 Why this card is awesome: Because of the retro hands-on-knees pose. By the late 1980's, most players were well on their way to becoming overpaid prima donnas, but you could count on Les Expos to stick with tradition. (I know it's Vance Law on the right, but not sure about on the left...is it Herm Winningham? No, It's Hubie Brooks.) 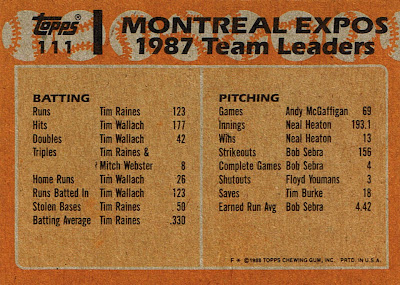 We have a winner. According to http://www.baseball-almanac.com/teamstats/roster.php?y=1987&t=MON
Hubie Brooks wore uniform #7. Herm Winningham (no relation to actress Mare Winningham of the Brat Pack) wore #3.

Andy, I love you, but you can't post that the readers should "click on links to make you money" because IIRC it's against Blogger policy. Instead you can encourage us to support your advertisers, but be careful about the language.

Thanks for the info David. I love you too.

That's neither Hubie Brooks nor Herm Winningham (nor Andre Dawson). That's got to be...Manny Trillo, wearing a Silence of the Lambs Hubie Brooks skin suit.
It's creepy, sure, but I'm glad there's a picture. It's part of baseball history.