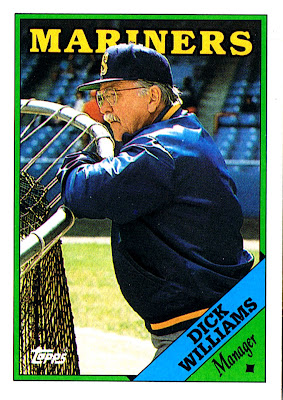 Why this card is awesome: Because it reminds us how far the Mariners franchise has come. Check out the card numbers for the roster. The only guy ending in a zero is Mark Langston (#80) who was clearly the best player on the team. The only guys ending in 5 are Phil Bradley (#55), Alvin Davis (#785), Jim Presley (#285), and Harold Reynolds (#485.) Not a terribly impressive bunch, with Reynolds as clearly the best player in terms of overall career. Back in these days, though, Seattle was never a very good team, and in fact wouldn't post it first winning record as a franchise until 1991.

Also, compare this card to that of Rene Gonzales. Looks like they might possibly have been taken at the same game. We should keep our eyes out for other Mariners and Orioles cards to see if there's any further evidence of this.

Cool stat: Dick Williams was a decent hitter and put together some nice seasons, particularly in 1956, 1959, and 1960. Here's his performance against HOF pitchers (only from 1957 on, as detailed data is not available before that). Twelve hits in 33 at-bats against Hoyt Wilhelm. Not bad.

Hall of Fame count: 13 (For Williams, elected just a few weeks ago!) 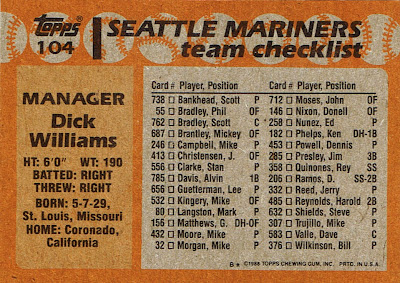 Just discovered this blog. Damn good! I'll be back each day to keep up.

The Gregg Jefferies card was a great disappointment to me. But I'll wait patiently.

I don't think there's a Jefferies card in this set, not even in the traded set. I believe his first card was 1989 Topps regular-issue.

By the way, I'll be cracking into a Topps Tiffany traded 1988 set at some point on this blog, but I got a lot of other special stuff to get to first.

They can't have been at the same game - both pictures are at Tiger Stadium!

Andy, you are of course correct about the Jefferies being in the 1989 set. Oops!