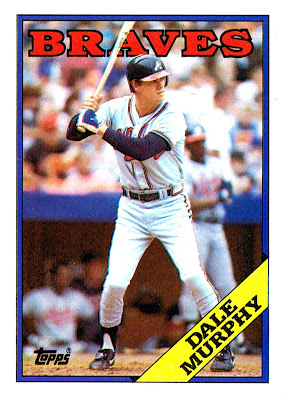 Why this card is awesome: Because I think that's Ken Griffey we see right behind Murhpy in the on-deck circle. As you can see here, Griffey was the most common batter in the 5th slot for Atlanta in 1987, coming right after Murphy in the cleanup spot. But it might be Gerald Perry. What do you think? Also, I think it's kind of a travesty that Murphy got only card number 90. I probably would have given him a card ending in 25 or 50, personally. 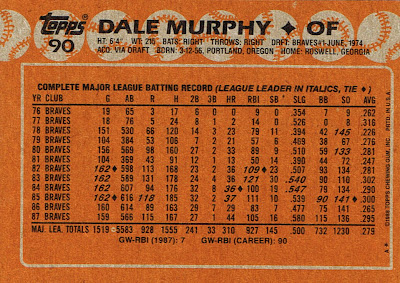 "Also, I think it's kind of a travesty that Murphy got only card number 90. I probably would have given him a card ending in 25 or 50, personally."

Maybe they bumped him down for being the on the box spokesperson for 1988 Donruss?

'87 was Murphy's last really great year. That stinker of an '88 team would have worn down Babe Ruth. Actually that team did wear down Babe Ruth, it was just the '35 Braves instead of the '88 Braves. Eh, they both stunk.

That's not Gerald Perry or Ken Griffey. It's Manny Trillo in a Ken Griffey mask!
Man, that guy is everywhere!

I know that by the time Murphy made it to the Phillies, he looked really worn down.

I noticed that the Braves cards (this one, Andres Thomas, and I think one or two others I've seen so far) are all in Shea Stadium. I bet it was one game, and being a research nut like you are, you can probably find out the exact date.

By the way, love this site. Addicting.

I always thought it was Griffey in the background.