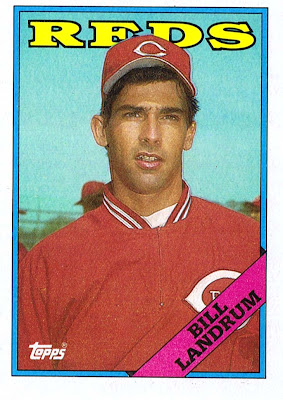 Why this card is awesome: Because it features the back of another guy's head, half of a third guy's face, a just the bill of a fourth guy's hat. Umm, come on, Topps.

Cool stat: 1988 was not good for Bill Landrum, but 1989 and 1990 were. There are just 6 pitchers who, in each of those years, appeared in at least 50 games and had an ERA+ of at least 160. The other five are Jeff Montgomery, Tom Henke, Dennis Eckersely, Rob Dibble, and Larry Andersen. 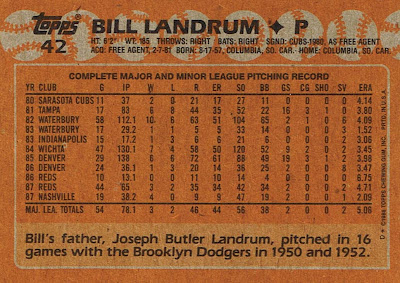 Is there ever going to be a card that you admit is NOT awesome?

If this was Tito, it would be awesome because he had the same name as the most awesome Jackson brother.

But come on, this is Bill!

a key addition for the bucs (which had his best years with), helped the bullpen in the early 90's.

mmosley, I was trying to suggest that the picture was pretty poor and actually that this card is therefore NOT awesome...but take all my comments with a grain of salt :)

I guess you just starting making believe that every card in the set actually is awesome!

You can't go wrong with a name like Tito. :)