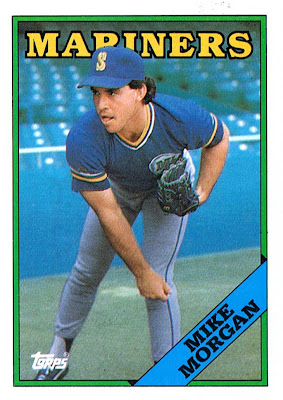 Why this card is awesome: It's a fantastic action shot of Morgan warming up during the 7th inning of a tie game in Seattle. Seriously, back then, that's how many Mariners fans were in the seats of the Kingdome. (OK, joke's over..Morgan was a starter back then anyway.)

Cool stat: This one surprised me. Morgan's got the lowest winning percentage all-time for a player with at least 400 career starts. And not only that, but he's way out in the lead. For #2 Bob Friend to have equaled him, Friend would need to have had 30 more losses on his record! #3 Steve Trachsel would need 32 more losses (without another win) to catch Morgan. Geez! 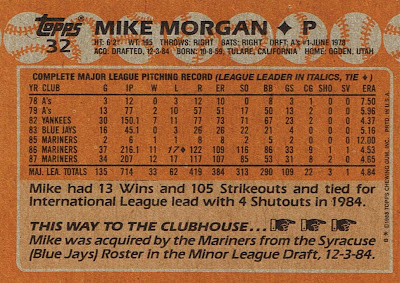 More about Mike Morgan and this record here.

The pic is actually in Tiger Stadium. Topps took a lot of pictures of guys warming up on the foul-territory bullpen mound; 87 Topps Steve Carlton and 92 Topps Ed Nunez jump to mind...

Tiger Stadium had a very distinctive blue look to it.